You are here: Home / Books / How to Cuss in Western 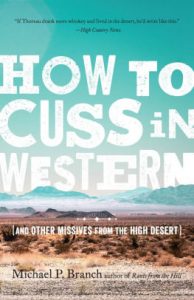 This book of humorous creative nonfiction contains 35 essays (of approximately 2,000-words each), each a small story about the wildlife, landscape, and strange human characters in the remote high desert. By turns moving and funny, these essays deeply engage a home landscape, exploring the inspiring beauty and often the downright weirdness of living in a place that is both exhilarating and intimidating. The stories included here range from flash floods to wildfire, from rodeos to the Muppets, from harvester ants to hens to hedgehogs, from stirring septic tanks to trapping leprechauns, and include a practical lesson on western American profanity and a natural and cultural history of flatulence.

Praise for How to Cuss in Western:

As it was for Branch’s literary heroes, Henry David Thoreau and Edward Abbey, the wild emerges here as a place of unlimited possibility. By turns hilarious and thought-provoking, Branch’s collection will not disappoint.” –Publisher’s Weekly

Not long ago, Mike Branch was a respected academic, one of the founders of ecocriticism, before he shed that old skin and emerged anew as a kind of Thoreau in Groucho glasses. That emergence has been a delight for readers, who find both laughter and wisdom in the words of this Western ranter, perched high in his desert home in Nevada, up on Ranting Hill, where he worships a divine troika of family, humor, and place. In his always-engaging essays, we encounter sage and pronghorn, juniper and sandstone, but also garden gnomes, the art of wheel waving, casual strolls to California, Muppets, and a deep meditation on flatulence. A book that could proudly sit on any Western shelf next to Austin’s or Abbey’s.” –David Gessner, author of All the Wild that Remains

Michael Branch is a master of iconoclastic irony and gifted with a unique and compelling storytelling style that will keep the reader’s attention riveted throughout. Absorbing, challenging, entertaining, thoughtful, and thought-provoking, How to Cuss in Western is a truly memorable read.” – Midwest Book Review

Both [Edward Abbey and Michael Branch] have an endearing knack for self-deprecation, but whereas Abbey’s humor has a satiric bite and a radical edge, Branch’s shows more affection, tolerance, and balance. He’s sensitive to all the paradoxes and dilemmas that come with being an environmentalist, homesteader, parent, and teacher in an era of global warming and triumphant industrial capitalism….[Branch’s] books are an easy but stimulating read, serving up a spirited blend of yarns, jokes, western lore, family life, wildlife encounters, and cultural commentary briskly seasoned with literary and intellectual allusions.” –ISLE: Interdisciplinary Studies in Literature and Environment

Just as the ancients chased acclaim on that mountain named Parnassus, Branch sought wisdom and inspiration in the Silver Hills that serve as setting for most of these short essays. The locale will invite comparisons to Mark Twain, who lit out early for the Nevada Territory with his brother Orion and wrote up the tall tales that pepper Roughing It (1872) . . . [Branch’s] gift for humor arises in well-turned phrases and ironic scenes . . . You might not know which to prefer: the erudite storyteller with the massive vocabulary, or the good old boy who confesses he’s also a bit of a gearhead. But you need not choose between the two.” –The Spokesman-Review

Michael actually reminds me a bit of Ed Abbey . . . . Neither one of the two seem to have a shred of pretentiousness about them and their humor is not contrived; it is earned from the school of hard knocks and human experience, which is to say it rises from the organic and appeals because it is grounded in the imagery of the natural world. Both men are the epitome of being comfortable in their own skins with not one dammed thing to flaunt or prove, and in that light both are easy to like, listen to and believe, and laughter comes easily through that association and comfort level.” –David Lee, Pulitzer Prize-nominated former Poet Laureate of Utah

It’s not easy to live in the high desert of the American West—it requires an eye for the sparest sort of natural beauty, a robust sense of humor that can help one weather the inevitable indignities and hardships that accompany life in such a landscape, and, yes, even a special class of regionally inflected swear words. Michael P. Branch once again offers his readers a companionable journey into the remote places he loves so we might share in the unique joy and humor he finds there.” –S. M. Hulse, author of Black River

Readers immediately get a sense of this grumpy, desert dwelling writer’s love for his family, respect and admiration for the challenging environment he chooses to call home, and his penchant for cold beverages . . . . Regardless of whether one is laughing about the extreme measures taken to win a fire competition or pondering one of the pressing environmental issues society is facing, Branch offers readers a moment to step away from current worries and obtain a different perspective.” –Whole Terrain: A Journal of Reflective Environmental Practice

Check out the How to Cuss in Western book trailer!

Order How to Cuss in Western at your favorite book seller: