You are here: Home / Books / On the Trail of the Jackalope 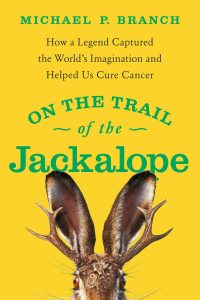 The never-before-told story of the horned rabbit—the myths, the hoaxes, the very real scientific breakthrough it inspired—and how it became a cultural touchstone of the American West.

Just what is a jackalope? Purported to be part jackrabbit and part antelope, the jackalope began as a local joke concocted by two young brothers in a small Wyoming town during the Great Depression. Their creation quickly spread around the U.S., where it now regularly appears as innumerable forms of kitsch—wall mounts, postcards, keychains, coffee mugs, shot glasses, and so on. A vast body of folk narratives has carried the jackalope’s fame around the world to inspire art, music, film, even erotica!

Although the jackalope is an invention of the imagination, it is nevertheless connected to actual horned rabbits, which exist in nature and have for centuries been collected and studied by naturalists. Around the time the two young boys were creating the first jackalope in Wyoming, Dr. Richard Shope was making his first breakthrough about the cause of the horns: a virus. When the virus that causes rabbits to grow “horns” (a keratinous carcinoma) was first genetically sequenced in 1984, oncologists were able to use that genetic information to make remarkable, field-changing advances in the development of anti-viral cancer therapies. The most important of these is the human papillomavirus (HPV) vaccine, which protects against cervical and other cancers. Today, jackalopes are literally helping us cure cancer.

Praise for On the Trail of the Jackalope:

Mr. Branch knows at least as much about jackalopes as Einstein knew about physics. He reveals that the jackalope of American folklore (or inspired hucksterism) has a real-life counterpart—the hornéd rabbit, a creature with protrusions that can resemble antlers. Mr. Branch has a good deal to say about one of nature’s stranger animals and also deeply ponders the mythological form, wondering why people dream up jackalopes and other fanciful creatures in the first place.” — Dave Shiflett, Wall Street Journal

In this charming travelogue, Branch recounts his tracking down of various jackalope tall tales and the roots of such hoaxes and our fascination with them. He ends with the amazing true story of the discovery of the role of a virus in actual naturally occurring ‘horned rabbits,’ and how this led to the creation of the vaccine for human papillomavirus.” – Booklist

On the Trail of the Jackalope is a marvelous romp in two stellar literary genres: American tall tales and the history of medicine. . . Even if jackalopes are a hoax, jackalope history is well worth exploring and Mr. Branch had a high time doing so. . . Just as brightly as the first half of the book shines with charm and good yarns, the second half impresses with excellent reporting on the history of medicine and the development of an anti-cancer vaccine. . . I highly recommend On the Trail of the Jackalope: How a Legend Captured the World’s Imagination and Helped Us Cure Cancer. It’s an excellent collection of well-told yarns and a fine piece of medical history reporting.”– Rebecca Coffey, Forbes Magazine

In this light-hearted contribution to investigative journalism, writer Michael Branch, who describes himself as ‘the world’s most zealous jackalope researcher’ takes readers on a cross-country tour of American jackalope subculture, with excursions into the history of mythic creatures, the art and craft of taxidermy, and the social psychology of hoaxes.” – Laurence A. Marschall, Natural History Magazine

I’ve longed for this book all my life. The ultimate prize in the souvenir shops of my Colorado boyhood was the Jackalope, but for all my wheedling, I never got closer to owning one than a postcard. Now I feel all that longing has been richly requited by this brilliant natural history. I have seldom said about a book that it NEEDED to be written, but this one absolutely did! Stunningly researched and lived, lovely in its conception and writing, Mike’s Trail is all of what he aimed for and more: an unforgettable journey along ‘the mighty, rolling river of Jackalopiana.’” – Robert Michael Pyle, author of Magdalena Mountain and Nature Matrix

Equal parts travelogue, natural history, and tall tale, Michael Branch’s On The Trail of the Jackalope is a hare-raising account of America’s most beloved hoax. Branch’s expansive investigation takes readers from basement taxidermy studios and dusty saloons to cryptozoology meetings and sophisticated virology labs. Best of all, his masterful wit and engaging prose ensure we all get to ride shot-gun on this fantabulous adventure. I wanted it to never end.” – Kathryn Miles, author of Quakeland and Trailed: One’s Woman’s Quest to Solve the Shenandoah Murders

I came to this book for jackalope gossip and lore, of which there is plenty. But what kept me turning the pages is Michael Branch’s smart, raucus discussions of tall folktales, elaborate hoaxes, conspiracy theories, and fanciful acts of taxidermy. On the Trail of the Jackalope is filled with examples of how we humans delight in fusing the facts of our natural world with utter fantasies. A delightful read.” – Elena Passarello, author of Animals Strike Curious Poses

Obsessions are funny things, especially when the object of the obsession is a rabbit with antlers. The thrill of going down this captivating rabbit hole, and the pleasure of following our engaging narrator as he learns everything there is to learn about the mythic jackalope, propels Michael Branch’s brilliant book. It’s a wild ride, told with the lively wit of the tall-tale tellers he admires, as Branch shows us how this fascinating embodiment of western kitsch is connected to, among other things, the identity of a small Wyoming town, the American folk tradition, Looney Tunes, mythology, taxidermy, cancer research, and death itself. Sit back as he spins his tale, and listen, learn, enjoy, and laugh.” – David Gessner, author of All the Wild That Remains: Edward Abbey, Wallace Stegner and the American West

Like Mark Twain, Branch delights in tall tales . . . On the Trail of the Jackalope will not convince anyone that jackalopes exist. But that is not its goal. Its goal is to track the vast outlands of the imagination.” –Paul Lindholdt, Spokane-Coeur d’Alene Living

Branch jumps down a rollicking rabbit hole to discover the mythical hare’s origin story, the nature of hoaxes, and the viral cancer that causes hornlike protrusions on some bunnies. Research into that virus led to a vaccine for cervical and other cancers. Branch thus gives the jack its due and revels in its kitsch and lore.” –Kate Nelson, New Mexico Magazine

Order On the Trail of the Jackalope at your favorite bookseller: