You are here: Home / Books / Rants from the Hill 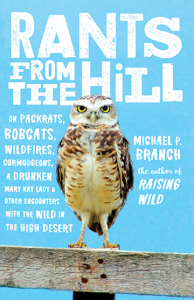 Rants from the Hill: On Packrats, Bobcats, Wildfires, Curmudgeons, a Drunken Mary Kay Lady, and Other Encounters with the Wild in the High Desert

This book of place-based, narrative creative nonfiction collects many of the “Rants from the Hill,” 2,000-word essays unified by their focus on the experience of making home in the western Great Basin Desert. The Rants employ a desert rat narrator whose perspective and sensibility produce a unique brand of humor that embraces both the challenges and contradictions inherent in dwelling in the remote high desert. Chapters have appeared in magazines including High Country News, Orion, Terrain.org, Sustainable Play, and ISLE: Interdisciplinary Studies in Literature and Environment.

Praise for Rants from the Hill:

Lyrical and subversive, the book is a rollicking celebration of living a joyously untamed life. An engagingly quirky collection.” –Kirkus Reviews

There have been dozens of hermit-in-the-woods Walden-like memoirs and essay collections written since Henry David Thoreau’s death, but few capture Thoreau’s raw, stubborn love for the natural world with as much humor and honesty as Michael P. Branch’s Rants from the Hill.” –Chicago Tribune

If Thoreau drank more whiskey and lived in the desert, he’d write like this.” –High Country News

At its best this book lends to Nevada the sort of sacred quality that good stories give to places. Reading it left me caring about a place I did not know and have never seen . . . . this book fits in well with the hyperlocal tradition of nature writing. Branch knows about something beautiful and wants to share it . . . . Rants from the Hill might fit well on a western nature writing syllabus, or selected essays might find a home in a broader course, but it’s mostly just a pleasure to read.” –Western American Literature

Branch’s humorous storytelling offers both natural history and life lessons. Readers may not realize they are learning while smiling . . . Branch communicates his love of family and the natural environment through both wit and seriousness.” –Whole Terrain

Along with the tomfoolery, the jokes, and the rye humor (and occasional puns), Rants from the Hill offers poignant observation, lyrical appreciation for a striking landscape, beauty, intelligence, wisdom . . . . These are lovely, smart essays, beautifully crafted. William Butler Yeats (I think it was) once said he wanted his poems to close with an almost audible click, a satisfying sense of closure. Branch’s Rants do that, taking you from fart jokes and satire (often self-directed) to some ineffable, lovely, epiphanic, incredibly smart and insightful moment that left me staring at the page at essay’s end, the laughs replaced by a silent ‘wow’.” –Ian Marshall, author of Story Line, Peak Experiences, and Walden by Haiku.

If the subtitle doesn’t clue you in, Michael P. Branch’s Rants from the Hill covers a wide range of insane, often unbelievable, encounters from Nevada’s Great Basin Desert. A humorist and an environmentalist, Branch channels his unmatched wit and love for his unforgiving surroundings into his book-long rant about everything from his crazy neighbors to the pesky desert animals to unexpected wildfires and more. Fun and charming, Rants from the Hill will not only change the way you look at the desert, but it will transform your opinions of the people who live there, too.” —Bustle

Check out the Rants from the Hill book trailer!

Order Rants from the Hill at your favorite book seller: